Detailed description of the molecular organization behind AFM images of polymer coatings: a molecular modeling approach 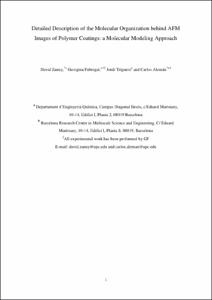 Except where otherwise noted, content on this work is licensed under a Creative Commons license : Attribution-NonCommercial-NoDerivs 3.0 Spain
Abstract
The current experimental techniques of surface characterization provide structural information on a much larger scale than that in which atomistic details can be observed. In this work, this size gap gets reduced by consistently combining different modeling techniques, which leads to describe the topographic profiles of thin polymer coatings at the atomistic level. A new modeling protocol that combines Monte Carlo generation with molecular dynamics relaxation has allowed us to reproduce the experimental topography of extremely thin poly(3,4-ethylenedioxythiophene) coating films using only the generated molecular models. The key element of this protocol relies on parceling the studied surfaces in independent small plots, of which detailed molecular models are built. Combining a finite number of independent models enables us to mimic the molecular organization of a large length of film that is orders of magnitude larger than the commonly used size in molecular models. The reconstructed area reproduces the thickness and roughness of very thin polymer coatings that were explicitly obtained for this study using very short electropolymerization times. This work shows a feasible way of visualizing with atomistic detail surfaces coated with polymeric films.
CitationZanuy, D., Fabregat, G., Triguero, J., Aleman, C. Detailed description of the molecular organization behind AFM images of polymer coatings: a molecular modeling approach. "The journal of physical chemistry. Part C, nanomaterials and interfaces", 13 Agost 2018, vol. 122, núm. 35, p. 20261-20270.
URIhttp://hdl.handle.net/2117/122641
DOI10.1021/acs.jpcc.8b04497
ISSN1932-7447
Publisher versionhttps://pubs.acs.org/doi/10.1021/acs.jpcc.8b04497
Collections
Share: