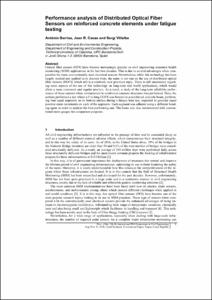 Optical fiber sensors (OFS) have become increasingly popular on civil engineering structural health monitoring (SHM) applications in the last two decades. This is due to several advantages when compared to the more conventionally used electrical sensors. Nevertheless, while this technology has been largely studied and applied in its discrete form, the same is not true on the use of distributed optical fiber sensors (DOFS) which still is a relatively new practiced topic. There is still uncertainty regarding some aspects of the use of this technology on long-term real world applications, which would allow a more consistent and regular practice. As a result, a study of the long-term reliability performance of these sensors when instrumented to reinforced concrete structures was performed. Here, the authors performed a test where a 5 m long DOFS was bonded to a reinforced concrete beam, performing four equal segments on its bottom surface during a fatigue load test, expected to generate equal positive strain increments on each of the segments. Each segment was adhered using a different bonding agent in order to analyze the best performing one. The beam was also instrumented with conventional strain gauges for comparison purposes.
CitationBarrias, A., Casas, J., Villalba, S. Performance analysis of Distributed Optical Fiber Sensors on reinforced concrete elements under fatigue testing. A: fib International PhD-Symposium in Civil Engineering. "Proceedings of The 12th fib International PhD Symposium in Civil Engineering: Czech Technical University in Prague, 29-31 August 2018, Prague, Czech Republic". International Federation for Structural Concrete (fib), 2018, p. 953-960.
URIhttp://hdl.handle.net/2117/122106
ISBN978-80-01-06401-6
Publisher versionhttp://phdsymp2018.eu/dwn/Proceedings%20of%20the%2012th%20fib%20PhD%20Symposium.pdf
Other identifiershttps://www.researchgate.net/publication/327868232_Performance_analysis_of_Distributed_Optical_Fiber_Sensors_on_reinforced_concrete_elements_under_fatigue_testing