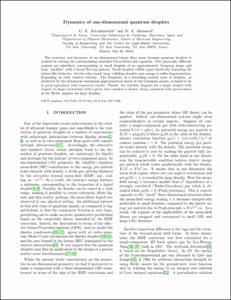 The structure and dynamics of one-dimensional binary Bose gases forming quantum droplets is studied by solving the corresponding amended Gross-Pitaevskii equation. Two physically different regimes are identified, corresponding to small droplets of an approximately Gaussian shape and large “puddles” with a broad flat-top plateau. Small droplets collide quasielastically, featuring the solitonlike behavior. On the other hand, large colliding droplets may merge or suffer fragmentation, depending on their relative velocity. The frequency of a breathing excited state of droplets, as predicted by the dynamical variational approximation based on the Gaussian ansatz, is found to be in good agreement with numerical results. Finally, the stability diagram for a single droplet with respect to shape excitations with a given wave number is drawn, being consistent with preservation of the Weber number for large droplets.
CitationAstrakharchik, G., Malomed, B. Dynamics of one-dimensional quantum droplets. "Physical review A", 30 Juliol 2018, vol. 98, núm. 1, p. 1-11.
URIhttp://hdl.handle.net/2117/122026
DOI10.1103/PhysRevA.98.013631
ISSN2469-9926
Publisher versionhttps://journals.aps.org/pra/abstract/10.1103/PhysRevA.98.013631