In vitro response of mesenchymal stem cells to biomimetic hydroxyapatite substrates: a new strategy to assess the effect of ion exchange 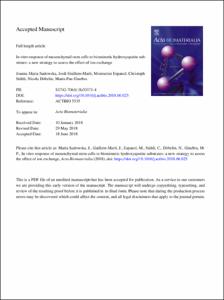 Document typeArticle
PublisherElsevier
Rights accessOpen Access
All rights reserved. This work is protected by the corresponding intellectual and industrial property rights. Without prejudice to any existing legal exemptions, reproduction, distribution, public communication or transformation of this work are prohibited without permission of the copyright holder
Abstract
Biomaterials can interact with cells directly, that is, by direct contact of the cells with the material surface, or indirectly, through soluble species that can be released to or uptaken from the surrounding fluids. However, it is difficult to characterise the relevance of this fluid-mediated interaction separately from the topography and composition of the substrate, because they are coupled variables. These fluid-mediated interactions are amplified in the case of highly reactive calcium phosphates (CaPs) such as biomimetic calcium deficient hydroxyapatite (CDHA), particularly in static in vitro cultures. The present work proposes a strategy to decouple the effect of ion exchange from topographical features by adjusting the volume ratio between the cell culture medium and biomaterial (VCM/VB). Increasing this ratio allowed mitigating the drastic ionic exchanges associated to the compositional changes experienced by the material exposed to the cell culture medium. This strategy was validated using rat mesenchymal stem cells (rMSCs) cultured on CDHA and beta-tricalcium phosphate (ß-TCP) discs using different VCM/VB ratios. Whereas in the case of ß-TCP the cell response was not affected by this ratio, a significant effect on cell adhesion and proliferation was found for the more reactive CDHA. The ionic exchange, produced by CDHA at low VCM/VB, altered cell adhesion due to the reduced number of focal adhesions, caused cell shrinkage and further rMCSs apoptosis. This was mitigated when using a high VCM/VB, which attenuated the changes of calcium and phosphate concentrations in the cell culture medium, resulting in rMSCs spreading and a viability over time. Moreover, rMSCs showed an earlier expression of osteogenic genes on CDHA compared to sintered ß-TCP when extracellular calcium fluctuations were reduced. Statement of Significance Fluid mediated interactions play a significant role in the bioactivity of calcium phosphates. Ionic exchange is amplified in the case of biomimetic hydroxyapatite, which makes the in vitro characterisation of cell-material interactions especially challenging. The present work proposes a novel and simple strategy to explore the mechanisms of interaction of biomimetic and sintered calcium phosphates with mesenchymal stem cells. The effects of topography and ion exchange are analysed separately by modifying the volume ratio between cell culture medium and biomaterial. High ionic fluctuations interfered in the maturation of focal adhesions, hampering cell adhesion and leading to increased apoptosis and reduced proliferation rate.
CitationSadowska, J., Guillem-Marti, J., Español, M., Stähli, C., Dobelin, N., Ginebra, M.P. In vitro response of mesenchymal stem cells to biomimetic hydroxyapatite substrates: a new strategy to assess the effect of ion exchange. "Acta biomaterialia", Agost 2018, vol. 76, p. 319-332.
URIhttp://hdl.handle.net/2117/121923
DOI10.1016/j.actbio.2018.06.025
ISSN1742-7061
Other identifiershttps://www.sciencedirect.com/science/article/pii/S1742706118303714
Collections
Share: