Thermodynamic behaviour of mixed films of an unsaturated and a saturated polar lipid : (Oleic Acid-Stearic Acid and POPC-DPPC) 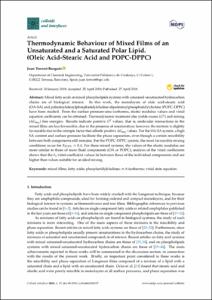 Document typeArticle
PublisherMultidisciplinary Digital Publishing Institute (MDPI)
Rights accessOpen Access
Abstract
Mixed fatty acids or mixed phospholipids systems with saturated-unsaturated hydrocarbon chains are of biological interest. In this work, the monolayers of oleic acid-stearic acid (OA-SA) and palmitoyloleoylphosphatidylcholine-dipalmitoylphosphatidylcholine (POPC-DPPC) have been studied. From the surface pressure-area isotherms, elastic modulus values and virial equation coefficients can be obtained. Thermodynamic treatment also yields excess (GE) and mixing (DGmix) free energies. Results indicate positive GE values, that is, molecular interactions in the mixed films are less favourable, due to the presence of unsaturation; however, the mixture is slightly favourable due to the entropic factor that affords positive DGmix values. For the OA-SA system, a high SA content and surface pressure facilitate the phase separation, even though a certain miscibility between both components still remains. For the POPC-DPPC system, the most favourable mixing conditions occur for XPOPC 0.4. For these mixed systems, the values of the elastic modulus are more similar to those of more fluid components (OA or POPC); analysis of the virial coefficients shows that the b1 virial coefficient values lie between those of the individual components and are higher than values suitable for an ideal mixing.
CitationTorrent, J.; Torrent-Burgués, J. Thermodynamic behaviour of mixed films of an unsaturated and a saturated polar lipid : (Oleic Acid-Stearic Acid and POPC-DPPC). "Colloids and interfaces", Juny 2018, vol. 2, núm. 2, p. 17-1-17-15.
URIhttp://hdl.handle.net/2117/121921
DOI10.3390/colloids2020017
ISSN2504-5377
Collections
Share: