An empirical study on the use of i* by non-technical stakeholders: the case of strategic dependency diagrams 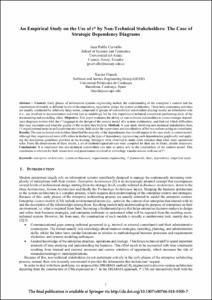 Document typeArticle
Rights accessOpen Access
All rights reserved. This work is protected by the corresponding intellectual and industrial property rights. Without prejudice to any existing legal exemptions, reproduction, distribution, public communication or transformation of this work are prohibited without permission of the copyright holder
Abstract
Early phases of information systems engineering include the understanding of the enterprise’s context and the construction of models at different levels of decomposition, required to design the system architecture. These time-consuming activities are usually conducted by relatively large teams, composed of groups of non-technical stakeholders playing mostly an informative role (i.e. not involved in documentation and even less in modelling), led by few experienced technical consultants performing most of the documenting and modelling effort. This paper evaluates the ability of non-technical stakeholders to create strategic dependency diagrams written with the i* language in the design of the context model of a system architecture, and find out which difficulties they may encounter and what the quality of the models they build is. A case study involving non-technical stakeholders from 11 organizational areas in an Ecuadorian university held under the supervision and coordination of the two authors acting as consultants. The non-technical stakeholders identified the majority of the dependencies that should appear in the case study’s context model, although they experienced some difficulties in declaring the type of dependency, representing such dependencies graphically and applying the description guidelines provided in the training. Managers were observed to make more mistakes than other more operational roles. From the observations of these results, a set of methodological advices were compiled for their use in future, similar endeavours. It is concluded that non-technical stakeholders can take an active role in the construction of the context model. This conclusion is relevant for both researchers and practitioners involved in technology transfer actions with use of i*.
CitationCarvallo, J.P., Franch, X. An empirical study on the use of i* by non-technical stakeholders: the case of strategic dependency diagrams. "Requirements engineering", Març 2019, vol. 24, núm. 1, p. 27-35.
URIhttp://hdl.handle.net/2117/121891
DOI10.1007/s00766-018-0300-7
ISSN0947-3602
Publisher versionhttps://link.springer.com/article/10.1007%2Fs00766-018-0300-7
Collections
Share: