Influence of cracking in the desiccation process of clay soils 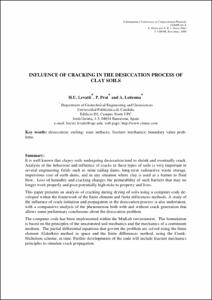 It is well known that clayey soils undergoing desiccation tend to shrink and eventually crack. Analysis of the behaviour and influence of cracks in these types of soils is very important in several engineering fields such as mine tailing dams, long-term radioactive waste storage, impervious core of earth dams, and in any situation where clay is used as a barrier to fluid flow. Loss of humidity and cracking changes the permeability of such barriers that may no longer work properly and pose potentially high risks to property and lives. This paper presents an analysis of cracking during drying of soils using a computer code de-veloped within the framework of the finite element and finite differences methods. A study of the influence of crack initiation and propagation in the desiccation process is also undertaken, with a comparative analysis of the phenomenon both with and without crack generation that allows some preliminary conclusions about the desiccation problem. The computer code has been implemented within the MatLab environment. The formulation is based on the principles of the unsaturated soil mechanics and the mechanics of a continuum medium. The partial differential equations that govern the problem are solved using the finite element (Galerkin) method in space and the finite differences method, using the Crank-Nicholson scheme, in time. Further developments of the code will include fracture mechanics principles to simulate crack propagation.
CitationLevatti, H.; Prat, P.; Ledesma, A. Influence of cracking in the desiccation process of clay soils. A: International Conference on Computational Plasticity. "X International Conference on Computational Plasticity". Barcelona: 2009, p. 1-4.
URIhttp://hdl.handle.net/2117/12189
ISBN978-84-96736-69-6