The harmonic triangle in Mengoli 's and Leibniz's works 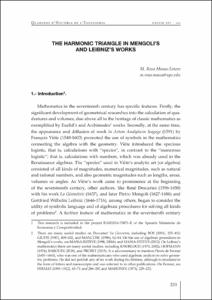 Document typeArticle
PublisherPublicacions UPC
Rights accessOpen Access
Abstract
The harmonic triangle was defined by Gottfried Wilhelm Leibniz (1646- 1716) in 1673, and its definition was related to the successive differences of the harmonic series. Leibniz studied it in many different texts throughout his life. Pietro Mengoli (1627-1686), rather at the same time, used the harmonic triangle as a triangular table to perform quadratures and also the interpola - ted harmonic triangle to calculate the quadrature of the circle. In this article we analyze and compare the independent treatment of harmonic triangle by Mengoli and Leibniz in their works, referring to their sources, their aims, and their uses. We show that, on the one hand, Mengoli uses triangular tables as a tool of calculus, and uses the harmonic triangle to perform quadratures through one procedure called by him “homology”. On the other hand, at the same time, Leibniz defines the harmonic triangle from the study on harmonic series, analyses its properties, and uses it to perform the summations of infi - nite series through one procedure called by him “sums of all the differences”. Harmonic triangle has an open visual structure in which the number of terms arranged in this way can be made infinite. The infinite therefore becomes one more element in the mathematical calculations of these authors, which in seventeenth century mathematics opened up a world of possibilities in the series and in their relations with infinitesimal calculus
CitationMassa, M. The harmonic triangle in Mengoli 's and Leibniz's works. "Quaderns d'història de l'enginyeria", 22 Juny 2018, vol. XVI, p. 233-258.
URIhttp://hdl.handle.net/2117/121858
ISSN1135-934X
Publisher versionwww.upcommons.upc.edu
Other identifiershttps://upcommons.upc.edu/handle/2117/118709
Collections
Share: