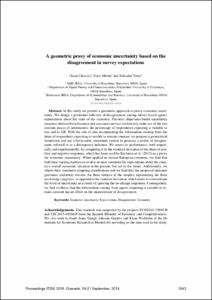 Torra Porras, Salvador
Document typeConference lecture
Rights accessOpen Access
Abstract
In this study we present a geometric approach to proxy economic uncertainty. We design a positional indicator of disagreement among survey-based agents' expectations about the state of the economy. Previous dispersion-based uncertainty measures derived from business and consumer surveys exclusively make use of the two extreme pieces of information: the percentage of respondents expecting a variable to rise and to fall. With the aim of also incorporating the information coming from the share of respondents expecting a variable to remain constant, we propose a geometrical framework and use a barycentric coordinate system to generate a metric of disagreement, referred to as a discrepancy indicator. We assess its performance, both empirically and experimentally, by comparing it to the standard deviation of the share of positive and negative responses, which has been used by Bachman et al. (2013) as a proxy for economic uncertainty. When applied in sixteen European countries, we find that both time-varying metrics co-evolve in most countries for expectations about the country's overall economic situation in the present, but not in the future. Additionally, we obtain their simulated sampling distributions and we find that the proposed indicator gravitates uniformly towards the three vertices of the simplex representing the three answering categories, as opposed to the standard deviation, which tends to overestimate the level of uncertainty as a result of ignoring the no-change responses. Consequently, we find evidence that the information coming from agents expecting a variable to remain constant has an effect on the measurement of disagreement.
CitationClaveria, O., Monte, E., Torra Porras, S. A geometric proxy of economic uncertainty based on the disagreement in survey expectations. A: International Conference on Time Series and Forecasting. "ITISE 2018: International Conference on Time Series and Forecasting: proceedings of papers: 19-21 September 2018: Granada (Spain)". 2018, p. 1543-1553.
URIhttp://hdl.handle.net/2117/121765
DLGr 1165-2018
ISBN978-84-17293-57-4
Publisher versionhttp://itise.ugr.es
Other identifiershttp://diposit.ub.edu/dspace/handle/2445/121329
Collections
Share: