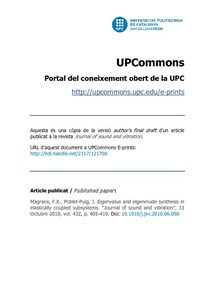 Document typeArticle
Rights accessOpen Access
Abstract
A method to synthesize the modal characteristics of a system from the modal characteristics of its subsystems is proposed. The interest is focused on those systems with elastic links between the parts which is the main feature of the proposed method. An algebraic proof is provided for the case of arbitrary number of connections. The solution is a system of equations with a reduced number of degrees of freedom that correspond to the number of elastic links between the subsystems. In addition the method is also interpreted from a physical point of view (equilibrium of the interaction forces). An application to plates linked by means of springs shows how the global eigenfrequencies and eigenmodes are properly computed by means of the subsystems eigenfrequencies and eigenmodes.
CitationMagrans, F.X., Poblet-Puig, J. Eigenvalue and eigenmode synthesis in elastically coupled subsystems. "Journal of sound and vibration", 13 Octubre 2018, vol. 432, p. 405-419.
URIhttp://hdl.handle.net/2117/121700
DOI10.1016/j.jsv.2018.06.050
ISSN0022-460X
Publisher versionhttps://www.sciencedirect.com/science/article/pii/S0022460X18304127?via%3Dihub
Collections
Share: