On decay centrality in graphs 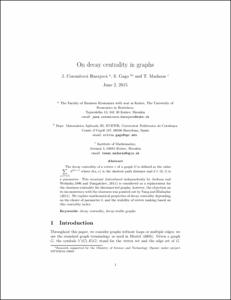 Madaras, Tomas
Document typeArticle
Rights accessOpen Access
All rights reserved. This work is protected by the corresponding intellectual and industrial property rights. Without prejudice to any existing legal exemptions, reproduction, distribution, public communication or transformation of this work are prohibited without permission of the copyright holder
Abstract
The decay centrality of a vertex v in a graph G with respect to a parameter d¿(0,1) is a polynomial in d such that for fixed k the coefficient of dk is equal to the number of vertices of G at distance k from v. This invariant (introduced independently by Jackson and Wolinsky in 1996 and Dangalchev in 2011) is considered as a replacement for the closeness centrality for graphs, however its unstability was pointed out by Yang and Zhuhadar in 2011. We explore mathematical properties of decay centrality depending on the choice of parameter d and the stability of vertex ranking based on this centrality index.
CitationCoronicová Hurajová, J., Gago, S., Madaras, T. On decay centrality in graphs. "Mathematica scandinavica", 6 Agost 2018, vol. 123, núm. 1, p. 39-50.
URIhttp://hdl.handle.net/2117/121616
DOI10.7146/math.scand.a-106210
ISSN0025-5521
Publisher versionhttps://www.mscand.dk/article/view/106210
Collections
Share: