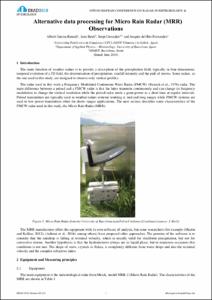 Document typeConference lecture
Rights accessOpen Access
Abstract
The most common function of weather radars is to provide a description of the precipitation field, typically in four dimensions: temporal evolution of a 3D field, including characteristics of precipitation and rainfall intensity. Some radars, as the one used in this study, are designed to observe only vertical profiles. The radar used in this work is a Frequency Modulated Continuous Wave Radar (FMCW) (Strauch et al, 1976) radar, unlike traditional pulsed radar systems. The main difference is that FMCW systems transmit continuously and can change their frequency modulation to change the vertical resolution while the pulsed radar emits a great power in short time a pulse. Pulsed transmitters are typically used in weather radars systems working at mid and long ranges while FMCW systems are used in low power transmitters often for short-range applications. The MRR manufacturer offers the equipment with its own software of analysis, but some researchers (for example Maahn and Kollias (2012), Adirosi et al (2016) among others) have proposed other approaches. The premise of the software is to consider that the raindrop is falling at terminal velocity, which is usually valid for stratiform precipitation, but not for convective storms. Another hypothesis is that the hydrometeors always are in liquid phase, but in numerous occasions, this is not the case. The shape of ice crystals or snowflakes is completely different from water drops, also the terminal velocity, and the complex refractive index. The aim of this study is to propose a new technique to process data for the raw MRR's files to achieve a better active and configurable noise detection. The technique is related to that described by Maahn and Kollias (2012) but under the assumption of hydrometer fall terminal speed, thus Mie scattering is used. The different parameters analysed include: Signal detection, Active noise level determination, Spectrum average, Dealiasing processing (Velocity unfolding), Drop size distribution, Path Integrated rain attenuation and Reflectivity calcula- tion. The presentation will compare and discuss results obtained with the new methodology and other existing approaches. This study was partly supported by projects CGL2015-65627-C3-2-R (MINECO/FEDER) and CGL2016-81828-REDT (MINECO).
CitationGarcia-Benadí, A., Bech, J., González , S., Del Rio, J. Alternative processing for micro rain radar (MRR) observations. A: European Conference on Radar in Meteorology and Hydrology. "ERAD2018: 10th European Conference on Radar in Meteorology and Hydrology: Ede-Wageningen, The Netherlands: July 1-6, 2018: abstracts book". , p. 786-796.
URIhttp://hdl.handle.net/2117/121600
DOI10.18174/454537
Collections
Share: