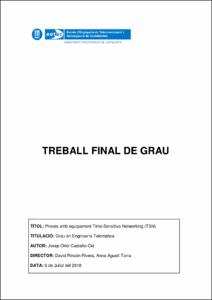 Time-Sensitive Networking (TSN) is a set of standards in development by one of the working groups of the IEEE 802.1 (formed in November 2012) by renaming the existing Audio / Video Bridging Task Group. These standards define mechanisms that allow the transmission of time-sensitive data over Ethernet networks, guaranteeing the latency of the packages and avoiding the loss of critical traffic, among others. Therefore, they provide packet switching networks with the ability to establish a communication with time constraints, which allow the transport of the synchronous services necessary for real-time applications, in which it is essential that certain packets cross the network without delay even when the load of the network is high. The three main keys of these standards are the synchronization between equipment needed to have a communication in real time, the scheduling and traffic shaping of traffic classes to distinguish from the most critical and the selection and reserve of the routes shared between the terminals. Several industries can benefit from this technology a part from audiovisual industry originally contemplated in the Audio / Video Bridging standards. TSN goes further and adapts to aeronautics, rail transport, to automotive industry (communications of autonomous cars, video streams from cameras, internal communication channels ...) and to factories with real time control systems, among others. The objective of this work is to study and document the state of the art of standards, to look for AVB/TSN implementations and to test them in the equipment's of the laboratory, as well as to test and document the special equipment acquired with TSN functionalities and to prepare a set of demonstrations to illustrate the main features of each standard.
SubjectsEthernet (Local area network system), Virtual computer systems, Ethernet (Sistema de xarxa d'àrea local), Sistemes virtuals (Informàtica)
URIhttp://hdl.handle.net/2117/121567