Design of a planetary aerobot 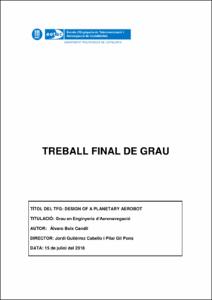 The main objective of this project is to design an aerial vehicle which can contribute in planetary research in a more optima l way than the current missions. It has been decided that an aerobot, which consists in a balloon and scientific instrumentation (also known as payload) hanging from this balloon, would be a suitable option due t o its better resolution than orbiters and it s better mobilit y than rovers. This balloon is filled with a buoyant gas that must be lighter than the atmospheric air in order to make possible the balloon flight. In this project there is a study of the different aerobot and buoyant gas options that coul d be employed for this mission. In more specific terms, the chosen aerobot is a helium Super Pressure Balloon made of LLDPE, which has a positive pressure differential pressure between the internal and atmospheric pressure, so its float altitude would kee p constant along its flight. The balloon size and mass , internal properties , vertical speed during ascension and lifetime of the balloon are some of the aerobot characteristics that have been computed in this project. This balloon endurance is determined b y the film leakage features and helium diffusion . Moreover, a study of Mars has also been performed in order to apply the design of the aerobot to the singular Martian conditions. An atmosphere model for Mars has been settled , the Viking - Pathfinder , from which the balloon characteristics have been determined. Furthermore, there have been exposed different extra systems that could improve the performance of the aerobot, increasing its exploration capabilities or its endurance . Finally, it has been conclud ed that a planetary aerobot is a system that would improve to a large extent the current exploration of solar system bodies with a substantial atmosphere due to it is proved that its design is possible . However, it is also needed a great improvement and fu ture work at the balloon envelope materials and buoyancy technology of a balloon in foreign atmospheres to make it a feasible mission.
SubjectsAstronautics, Astronàutica
URIhttp://hdl.handle.net/2117/121566