Analysis of the European airport network as a complex network 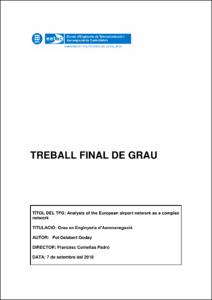 Document typeBachelor thesis
Rights accessOpen Access
Abstract
Globalization plays an important role in modern society. It exist the necessity to be connected and able to reach every place. Some of the most important networks and systems include the Internet network, the transport and comunication system, the electric grid, social networks,.. These can be considered as complex networks and each of them has specialized in a necessity. In order to satisfy the demand, networks must be resilient enough to fight against posible node failure, which can occur by a random or intentioned attack. When a node or set of nodes fail, the network has to reorganize its connections with other operative neighbor nodes and assign them the load of the initial node, being the most equitable possible. Recent studies have created models about cascade failure of real networks as Twitter, Facebook or the electric grid. In this final degree project we study the behaviour of the global airport network, composed by the United States and Europe networks when cascade failure exist. Specifically, an initial radius is set to determine the failing airports.Taking in account the fact that each airport can handle a maximum amount of flight transfers in spite of its scheduled flights, we have analysed the evolution of cadacade failure for different loads. Efffectivity of two failing methods is tested. Hence, properties of the United States, Europe and global networks are studied first, taking the data from public sources. Furthermore, an interpretation of the evolution of its propierties has been done, betwen years 2001 and 2018. The simulations and analysis has been done by using the "NetworkX" Python package that makes it easier to create, handle and analise complex networks.
SubjectsAirports, Aeroports
DegreeGRAU EN ENGINYERIA D'AERONAVEGACIÓ (Pla 2010)
Location
1: Europa
URIhttp://hdl.handle.net/2117/121563
Collections
Share: