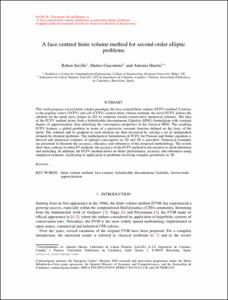 Document typeArticle
PublisherJohn Wiley & sons
Rights accessOpen Access
Abstract
This work proposes a novel finite volume paradigm, the face-centred finite volume (FCFV) method. Contrary to the popular vertex (VCFV) and cell (CCFV) centred finite volume methods, the novel FCFV defines the solution on the mesh faces (edges in 2D) to construct locally-conservative numerical schemes. The idea of the FCFV method stems from a hybridisable discontinuous Galerkin (HDG) formulation with constant degree of approximation, thus inheriting the convergence properties of the classical HDG. The resulting FCFV features a global problem in terms of a piecewise constant function defined on the faces of the mesh. The solution and its gradient in each element are then recovered by solving a set of independent element-by-element problems. The mathematical formulation of FCFV for Poisson and Stokes equation is derived and numerical evidence of optimal convergence in 2D and 3D is provided. Numerical examples are presented to illustrate the accuracy, efficiency and robustness of the proposed methodology. The results show that, contrary to other FV methods, the accuracy of the FCFV method is not sensitive to mesh distortion and stretching. In addition, the FCFV method shows its better performance, accuracy and robustness using simplicial elements, facilitating its application to problems involving complex geometries in 3D.
CitationSevilla, R., Giacomini, M., Huerta, A. A face-centred finite volume method for second-order elliptic problems. "International journal for numerical methods in engineering", 24 Agost 2018, vol. 115, núm. 8, p. 986-1014.
URIhttp://hdl.handle.net/2117/121553
DOI10.1002/nme.5833
ISSN0029-5981
Publisher versionhttps://onlinelibrary.wiley.com/doi/abs/10.1002/nme.5833
Collections
Share: