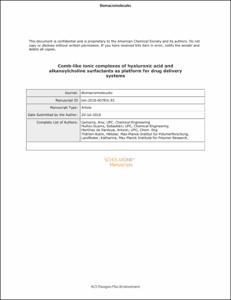 Nontoxic alkanoylcholine soaps (nACh) were synthesized from choline and fatty acids with numbers of carbons n equal to 12, 14, 16, and 18, the latter including both saturated and 9-cis unsaturated alkanoyl chains. Coupling of nACh with hyaluronic acid (HyA) rendered comblike ionic complexes nACh·HyA that were non-water-soluble. The complexes were thermally stable up to temperatures above 200 °C but readily degraded by water, in particular when hyaluronidases were present in the aqueous medium. In the solid state, these complexes were selfassembled in a biphasic layered structure in which the surfactant and the polysaccharide phases were alternating regularly with a periodicity dependent on the length of the alkanoyl chain. The paraffinic phase was found to be crystallized in saturated complexes with n = 14, but only 18ACh·HyA showed reversible melting crystallization when subjected to cyclic heating-cooling treatment. Nanoparticles with diameters in the 50-150 nm range were prepared by ionotropic gelation from unbalanced 18ACh·HyA complexes with surfactant:HyA ratios of 0.5 and 0.25. These nanoparticles were also structured in layers, swelled slowly in water, and shown to be noncytotoxic in in vitro assays against macrophages cells. It was also shown that the anticancer drug doxorubicin was efficiently encapsulated in both films and NPs of 18ACh·HyA, and its release was shown to be almost linear and complete after one day of incubation in physiological medium. The nACh·HyA complexes constitute a highly promising biocompatible/biodegradable platform for the design of systems suitable for drug transport and targeting delivery in anticancer chemotherapy.
CitationGamarra, A., Muñoz, S., Martinez de Ilarduya, A., Thérien-Aubin, H., Landfester, K. Comblike ionic complexes of hyaluronic acid and alkanoylcholine surfactants as a platform for drug delivery systems. "Biomacromolecules", 10 Setembre 2018, vol. 19, núm. 9, p. 3669-3618.
URIhttp://hdl.handle.net/2117/121506
DOI10.1021/acs.biomac.8b00783
ISSN1525-7797
Publisher versionhttps://pubs.acs.org/doi/10.1021/acs.biomac.8b00783