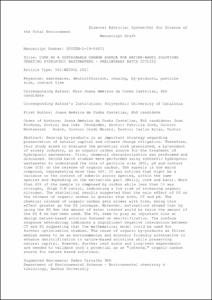 Except where otherwise noted, content on this work is licensed under a Creative Commons license : Attribution-NonCommercial-NoDerivs 3.0 Spain
Abstract
Reusing by-products is an important strategy to ensure the preservation of natural capital and climate change mitigation. This study aimed at evaluating the potential of cork granulates, a by-product of winery industry, as an organic carbon (OC) source for the treatment of hydroponic wastewaters. First, chemical characterization was performed and discussed. Secondly, batch studies were performed using synthetic hydroponic wastewater to understand the role of particle size (PS), pH and contact time (CT) on the release of OC. The suberin is the major compound, representing >50%. It was noticed that a variance on the content of suberin across species, within the same species and depending on the extraction part (belly, cork and back) could be expected. >60% of the sample is composed by carbon while <1% was nitrogen (high C:N ratio), indicating a low risk of releasing organic nitrogen. The statistical results suggested that the main effect of PS on the release of OC is greater than both, CT and pH. The chemical release of OC gets slower with time, being this effect greater as the PS increase. Moreover, estimations showed that using the 4¿mm PS, the amount of water treated would be twice the amount if the 8¿mm PS had been used. The PS seems to play an important role at design nature-based solutions (NBS) focused on denitrification. The surface response methodology indicates a significant negative interaction between CT and PS suggesting that the mathematical model could be used for further optimization studies. The reuse of organic by-products as filter media seems to be an economic and environmentally friendly alternative to enhance denitrification in NBS, while preserving natural capital. However, further real scale and long-term experiments are needed to validate cork's potential as an “internal” OC source for NBS.
CitationBosch, M., Brix, H., Formosa, J., Castellar, J., Morato, J., Fernández , A.I., Jove, P., Arias, C. A. Cork as a sustainable carbon source for nature-based solutions treating hydroponic wastewaters – Preliminary batch studies. "Science of the total environment", 2019, vol. 650, núm. Part 1, p. 267-276.
URIhttp://hdl.handle.net/2117/121481
DOI10.1016/j.scitotenv.2018.08.365
ISSN0048-9697
Collections
Share: