Power system optimization for a fixed-wing UAV with VTOL capability 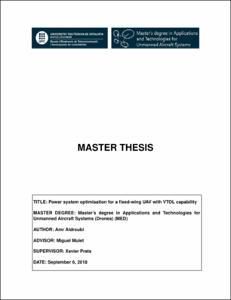 ; Mulet, Miquel
CovenanteeVenturi Unmanned Technologies
Document typeMaster thesis
Rights accessOpen Access
Abstract
This thesis is focused on optimising a power system for a fixed wing aircraft with VTOL (Vertical takeoff and landing) capability. This aircraft is meant to be used in various industrial sectors such as (such as agriculture, Oil, gas, electricity, trains. etc) for surveying and maintenance aspects. The aircraft can be equipped with any kind of sensors suitable for the mission. The dual capability of the drone reduces the consumption of power as it uses only one motor (the cruising motor) during the mission and the VTOL for ease of take-off and landing. Prior to the mission, the desired sensor will be attached to the aircraft, the desired way points will be defined using a ground control station, the aircraft will take-off vertically to a certain height then do a transition from the VTOL motors to the cruising motor, do the mission and land again at the starting point. The thesis presents all components involved in building up and optimising the power system of the aircraft such as batteries, ESC’s, motors and propellers. The motor- propeller combination was chosen based on a static and dynamic tests to get the highest efficiency with minimum power consumption. The hardware and software choices are combined into a system and implemented on the aircraft. The aircraft has 5 motors, 4 for the VTOL and one cruising motor, controlled by 5 ESC’s. Lithium- ion batteries are used to power up the aircraft so it will be fully electrical. The power optimisation takes in consideration the aerodynamics of the aircraft. In this thesis a multiple static and dynamic tests were done for the motors/propellers combinations and the results were promising, as will be discussed in details in the upcoming chap- ters . After performing a static and dynamic tests, the chosen motor is Q80 Hacker motor with 24x12 wood propeller as this combination gives the required thrust that the aircraft needs to fly and operate safely. Some improvements still needs be done in the future for the testing procedures and the method of collecting the data.
SubjectsDrone aircraft, Avions no tripulats
DegreeMÀSTER UNIVERSITARI EN APLICACIONS I TECNOLOGIES PER ALS SISTEMES AERIS NO TRIPULATS (DRONS) (Pla 2017)
URIhttp://hdl.handle.net/2117/121317
Collections
Share: