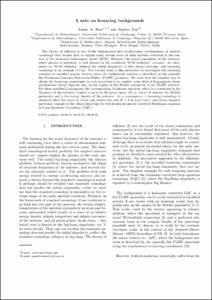 Pan, Supriya
Document typeArticle
PublisherAmerican Physical Society (APS)
Rights accessOpen Access
Abstract
The theory of inflation is one of the fundamental and revolutionary developments of modern cosmology that became able to explain many issues of the early Universe in the context of the standard cosmological model (SCM). However, the initial singularity of the Universe, where physics is indefinite, is still obscure in the combined SCM + inflation scenario. An alternative to SCM + inflation without the initial singularity is thus always welcome, and bouncing cosmology is an attempt at that. The current work is thus motivated to investigate the bouncing solutions in modified gravity theories when the background universe is described by the spatially flat Friedmann-Lemaître-Robertson-Walker (FLRW) geometry. We show that the simplest way to obtain the bouncing cosmologies in such spacetime is to consider some kind of Lagrangian whose gravitational sector depends only on the square of the Hubble parameter of the FLRW universe. For these modified Lagrangians, the corresponding Friedmann equation, a constraint in the dynamics of the Universe, depicts a curve in the phase space ( H , ¿ ) , where H is the Hubble parameter and ¿ is the energy density of the Universe. As a consequence, a bouncing cosmology is obtained when this curve is closed and crosses the axis H = 0 at least twice, and whose simplest particular example is the ellipse depicting the well-known holonomy corrected Friedmann equation in loop quantum cosmology (LQC). Sometimes, a crucial point in such theories is the appearance of the Ostrogradski instability at the perturbative level; however, fortunately enough, in the present work, as long as the linear level of perturbations is concerned, this instability does not appear, although it may appear at the higher order of perturbations.
CitationHaro, J., Pan, S. Note on bouncing backgrounds. "Physical review D", 15 Maig 2018, vol. 97, núm. 10.
URIhttp://hdl.handle.net/2117/121265
DOI10.1103/PhysRevD.97.103518
ISSN2470-0010
Publisher versionhttps://journals.aps.org/prd/abstract/10.1103/PhysRevD.97.103518
Collections
Share: