Regularization around a generic codimension one fold-fold singularity 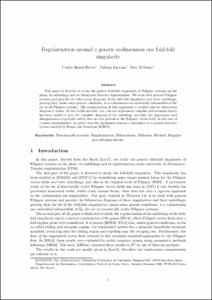 Regularization around a generic codimension one fold-fold singularity (8,093Mb)
Share:

Document typeArticle
Rights accessOpen Access
Abstract
This paper is devoted to study the generic fold-fold singularity of Filippov systems on the plane, its unfoldings and its Sotomayor–Teixeira regularization. We work with general Filippov systems and provide the bifurcation diagrams of the fold-fold singularity and their unfoldings, proving that, under some generic conditions, is a codimension one embedded submanifold of the set of all Filippov systems. The regularization of this singularity is studied and its bifurcation diagram is shown. In the visible–invisible case, the use of geometric singular perturbation theory has been useful to give the complete diagram of the unfolding, specially the appearance and disappearance of periodic orbits that are not present in the Filippov vector field. In the case of a linear regularization, we prove that the regularized system is equivalent to a general slow-fast system studied by Krupa and Szmolyan
CitationBonet, C., Fernandes, J., Martinez-seara, T. Regularization around a generic codimension one fold-fold singularity. "Journal of differential equations", 5 Setembre 2018, vol. 265, núm. 5, p. 1761-1838.
URIhttp://hdl.handle.net/2117/121257
DOI10.1016/j.jde.2018.04.047
ISSN0022-0396
Publisher versionhttps://www.sciencedirect.com/science/article/pii/S0022039618302468
Other identifiershttps://arxiv.org/abs/1605.02376
Collections
Share: