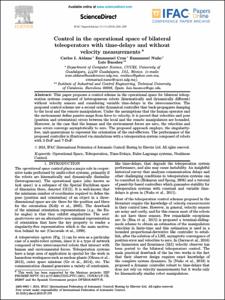 Except where otherwise noted, content on this work is licensed under a Creative Commons license : Attribution-NonCommercial-NoDerivs 3.0 Spain
Abstract
This paper proposes a control scheme in the operational space for bilateral teleoperation systems composed of heterogeneous robots (kinematically and dynamically different) without velocity sensors and considering variable time-delays in the interconnection. The proposed control scheme use a second order dynamical controller that back-propagates damping to the local and the remote manipulators. Under the assumptions that the human operator and the environment define passive maps from force to velocity, it is proved that velocities and pose (position and orientation) errors between the local and the remote manipulators are bounded. Moreover, in the case that the human and the environment forces are zero, the velocities and pose errors converge asymptotically to zero. The proposed approach employs, the singularity-free, unit-quaternions to represent the orientation of the end-effectors. The performance of the proposed controller is illustrated via simulations with a teleoperation system composed of robots with 3-DoF and 7-DoF.
CitationAldana, C., Cruz, E., Nuño, E., Basañez, L. Control in the operational space of bilateral teleoperators with time-delays and without velocity measurements¿. "IFAC-PapersOnLine", 1 Gener 2018, vol. 51, núm. 13, p. 204-209.
URIhttp://hdl.handle.net/2117/121245
DOI10.1016/j.ifacol.2018.07.278
ISSN2405-8963
Publisher versionhttps://www.sciencedirect.com/science/article/pii/S2405896318310309
Collections
Share: