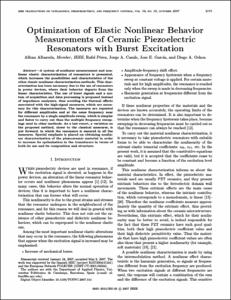 A system of nonlinear measurement and nonlinear elastic characterization of resonators is presented, which increases the possibilities and characteristics of the other classic nonlinear characterization methods. This characterization has been necessary due to the use of resonators in power devices, where their behavior departs from the linear characteristics. The use of burst signals and a system of acquisition and data processing is proposed instead of impedance analyzers, thus avoiding the thermal effects associated with the high-signal measures, which are necessary for this characterization. The measures are repeated for different amplitudes and at the same frequency near the resonance by a single amplitude sweep, which is simpler and faster to carry out than the multiple frequency sweepings used in other methods. As a last resort, a variation on the proposed method, closer to the classical measures, is put forward, in which the resonance is ensured in all the measures. Special emphasis is placed on obtaining nonlinear characterization of the piezoceramic material in order to increase its optimization in the transducers in terms of both its use and its composition and structure.
CitationAlbareda, A., Pérez, R., Casals, J.A., García, J. E., Ochoa, D. A. Optimization of elastic nonlinear behavior measurements of ceramic piezoelectric resonators with burst excitation. "IEEE transactions on ultrasonics ferroelectrics and frequency control", Octubre 2007, vol. 54, núm. 10, p. 2175-2188.
URIhttp://hdl.handle.net/2117/121133
DOI10.1109/TUFFC.2007.514
ISSN0885-3010
Publisher versionhttps://ieeexplore.ieee.org/document/4351663/