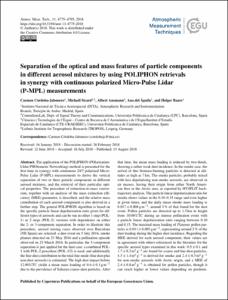 Ansmann, Albert
del Aguila, Ana
Baars, Holger
Document typeArticle
Rights accessOpen Access
ProjectACTRIS-2 - Aerosols, Clouds, and Trace gases Research InfraStructure (EC-H2020-654109)
TELEDETECCION LIDAR ATMOSFERICA Y OBSERVACIONES COOPERATIVAS: EXPLOTACION, PROCESADO DE LA SEÑAL Y BALANCE RADIATIVO. (MINECO-TEC2015-63832-P)
Abstract
The application of the POLIPHON (POlarization-LIdar PHOtometer Networking) method is presented for the first time in synergy with continuous 24/7 polarized Micro-Pulse Lidar (P-MPL) measurements to derive the vertical separation of two or three particle components in different aerosol mixtures, and the retrieval of their particular optical properties. The procedure of extinction-to-mass conversion, together with an analysis of the mass extinction efficiency (MEE) parameter, is described, and the relative mass contribution of each aerosol component is also derived in a further step. The general POLIPHON algorithm is based on the specific particle linear depolarization ratio given for different types of aerosols and can be run in either 1-step (POL-1) or 2 steps (POL-2) versions with dependence on either the 2- or 3-component separation. In order to illustrate this procedure, aerosol mixing cases observed over Barcelona (NE Spain) are selected: a dust event on 5 July 2016, smoke plumes detected on 23 May 2016 and a pollination episode observed on 23 March 2016. In particular, the 3-component separation is just applied for the dust case: a combined POL-1 with POL-2 procedure (POL-1/2) is used, and additionally the fine-dust contribution to the total fine mode (fine dust plus non-dust aerosols) is estimated. The high dust impact before 12:00UTC yields a mean mass loading of 0.6±0.1gm-2 due to the prevalence of Saharan coarse-dust particles. After that time, the mean mass loading is reduced by two-thirds, showing a rather weak dust incidence. In the smoke case, the arrival of fine biomass-burning particles is detected at altitudes as high as 7km. The smoke particles, probably mixed with less depolarizing non-smoke aerosols, are observed in air masses, having their origin from either North American fires or the Arctic area, as reported by HYSPLIT back-trajectory analysis. The particle linear depolarization ratio for smoke shows values in the 0.10–0.15 range and even higher at given times, and the daily mean smoke mass loading is 0.017±0.008gm-2, around 3% of that found for the dust event. Pollen particles are detected up to 1.5km in height from 10:00UTC during an intense pollination event with a particle linear depolarization ratio ranging between 0.10 and 0.15. The maximal mass loading of Platanus pollen particles is 0.011±0.003gm-2, representing around 2% of the dust loading during the higher dust incidence. Regarding the MEE derived for each aerosol component, their values are in agreement with others referenced in the literature for the specific aerosol types examined in this work: 0.5±0.1 and 1.7±0.2m2g-1 are found for coarse and fine dust particles, 4.5±1.4m2g-1 is derived for smoke and 2.4±0.5m2g-1 for non-smoke aerosols with Arctic origin, and a MEE of 2.4±0.8m2g-1 is obtained for pollen particles, though it can reach higher or lower values depending on predominantly smaller or larger pollen grain sizes. Results reveal the high potential of the P-MPL system, a simple polarization-sensitive elastic backscatter lidar working in a 24/7 operation mode, to retrieve the relative optical and mass contributions of each aerosol component throughout the day, reflecting the daily variability of their properties. In fact, this procedure can be simply implemented in other P-MPLs that also operate within the worldwide Micro-Pulse Lidar Network (MPLNET), thus extending the aerosol discrimination at a global scale. Moreover, the method has the advantage of also being relatively easily applicable to space-borne lidars with an equivalent configuration such as the ongoing Cloud-Aerosol LIdar with Orthogonal Polarization (CALIOP) on board NASA CALIPSO (Cloud-Aerosol Lidar and Infrared Pathfinder Satellite Observation) and the forthcoming Atmospheric Lidar (ATLID) on board the ESA EarthCARE mission.
CitationCordoba-Jabonero, C., Sicard, M., Ansmann, A., del Aguila, A., Baars, H. Separation of the optical and mass features of particle components in different aerosol mixtures by using POLIPHON retrievals in synergy with continuous polarized Micro-Pulse Lidar (P-MPL) measurements. "Atmospheric measurement techniques", 15 Agost 2018, vol. 11, núm. 8, p. 4775-4795.
URIhttp://hdl.handle.net/2117/121080
DOI10.5194/amt-11-4775-2018
ISSN1867-1381
Publisher versionhttps://www.atmos-meas-tech.net/11/4775/2018/
Collections
Share: