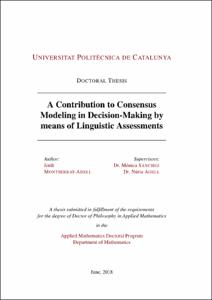 Decision-making is an active field of research. Specifically, in recent times, a lot of contributions have been presented on decision-making under linguistic assessments. To tackle this kind of processes, hesitant fuzzy linguistic term sets have been introduced to grasp the uncertainty inherent in human reasoning when expressing preferences. This thesis introduces an extension of the set of hesitant fuzzy linguistic term sets to capture differences between non-compatible assessments. Based on this extension, a distance between linguistic assessments is defined to quantify differences between several opinions. This distance is used in turn to present a representative opinion from a group in a decision-making process. In addition, different consensus measures are introduced to determine the level of agreement or disagreement within a decision-making group and are used to define a decision maker’s profile to keep track of their dissension with respect to the group as well as their level of hesitancy. Furthermore, with the aim of allowing decision makers to choose the linguistic terms that they feel more comfortable with, the concept of free double hierarchy hesitant fuzzy linguistic term set is developed in this thesis. Finally, a new approach of the TOPSIS methodology for processes in which the assessments are given by means of free double hierarchy hesitant fuzzy information is presented to rank alternatives under these circumstances.
CitationMontserrat Adell, J. "A contribution to consensus modeling in decision-making by means of linguistic assessments". Tesi doctoral, UPC, Facultat de Matemàtiques i Estadística, 2018. Available at: <http://hdl.handle.net/2117/121039>
URIhttp://hdl.handle.net/2117/121039

Except where otherwise noted, content on this work is licensed under a Creative Commons license: Attribution-NonCommercial 4.0 Generic