Optimizing the topological and combinatorial complexity of isosurfaces 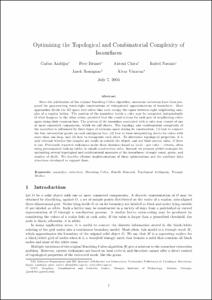 Document typeArticle
PublisherElsevier
Rights accessOpen Access
Abstract
Since the publication of the original Marching Cubes algorithm, numerous variations have been proposed for guaranteeing water-tight constructions of triangulated approximations of isosurfaces. Most approaches divide the 3D space into cubes that each occupy the space between eight neighboring samples of a regular lattice. The portion of the isosurface inside a cube may be computed independently of what happens in the other cubes, provided that the constructions for each pair of neighboring cubes agree along their common face. The portion of the isosurface associated with a cube may consist of one or more connected components, which we call sheets. The topology and combinatorial complexity of the isosurface is influenced by three types of decisions made during its construction: (1) how to connect the four intersection points on each ambiguous face, (2) how to form interpolating sheets for cubes with more than one loop, and (3) how to triangulate each sheet. To determine topological properties, it is only relevant whether the samples are inside or outside the object, and not their precise value, if there is one. Previously reported techniques make these decisions based on local —per cube— criteria, often using precomputed look-up tables or simple construction rules. Instead, we propose global strategies for optimizing several topological and combinatorial measures of the isosurfaces: triangle count, genus, and number of shells. We describe efficient implementations of these optimizations and the auxiliary data structures developed to support them.
CitationAndújar, C. [et al.]. Optimizing the topological and combinatorial complexity of isosurfaces. "Computer-aided design", Juliol 2005, vol. 37, núm. 8, p. 847-857.
URIhttp://hdl.handle.net/2117/12103
DOI10.1016/j.cad.2004.09.013
DLElse
ISSN0010-4485
Collections
Share: