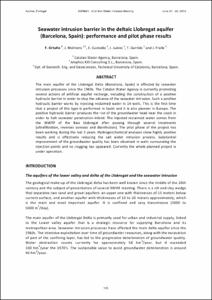 Juárez Álvarez, Iker
Garrido, Teresa
Fraile, Josep
Document typeConference report
Rights accessOpen Access
Abstract
The main aquifer of the Llobregat Delta (Barcelona, Spain) is affected by seawater intrusion processes since the 1960s. The Catalan Water Agency is currently promoting several actions of artificial aquifer recharge, including the construction of a positive hydraulic barrier in order to stop the advance of the seawater intrusion. Such a positive hydraulic barrier works by injecting reclaimed water in 14 wells. This is the first time that a project of this type is performed in Spain and it is also pioneer in Europe. The positive hydraulic barrier produces the rise of the groundwater head near the coast in order to halt seawater penetration inland. The injected reclaimed water comes from the WWTP of the Baix Llobregat after passing through several treatments (ultrafiltration, reverses osmosis and disinfection). The pilot phase of the project has been working during the last 3 years. Hydrogeochemical analyses show highly positive results and is effectively reducing the salt water intrusion process. Substantial improvement of the groundwater quality has been observed in wells surrounding the injection points and no clogging has appeared. Currently the whole planned project is under operation.
CitationOrtuño Gobern, F. (ACA) [et al.]. Seawater intrusion barrier in the deltaic Llobregat aquifer (Barcelona, Spain): performance and pilot phase results. A: Salt Water Intrusion Meeting. "21st Salt Water Intrusion Meeting". Ponta Delgada, São Miguel, Azores: 2011, p. 135-138.
URIhttp://hdl.handle.net/2117/12101
ISBN978–972–97711–5–6
Publisher versionhttp://www.swim21-azores2010.com/e-bookfiles/SWIM21_eBook.pdf
Collections
Share: