Anthropological Reflections on the Art of the Possible 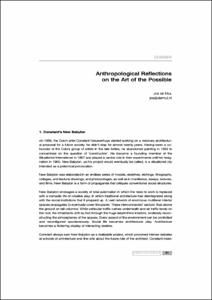 Except where otherwise noted, content on this work is licensed under a Creative Commons license : Attribution-NonCommercial-NoDerivs 3.0 Spain
Abstract
«In 1956, the Dutch artist Constant Nieuwenhuys started working on a visionary architectural proposal for a future society; he didn’t stop for almost twenty years. Having been a cofounder of the Cobra group of artists in the late forties, he abandoned painting in 1953 to concentrate on the question of ‘construction’. He became a founding member of the Situationist International in 1957 and played a central role in their experiments until his resignation in 1960. New Babylon, as his project would eventually be called, is a situationist city intended as a polemical provocation.
URIhttp://hdl.handle.net/2117/120984
ISSN1579-4431
Collections
Share: