What is Happening to Modern Architecture? 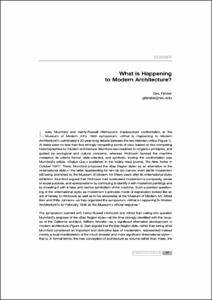 Lewis Mumford and Henry-Russell Hitchcock’s impassioned confrontation at the Museum of Modern Art’s 1948 symposium, «What is Happening to Modern Architecture?» culminated a 20-year-long debate between the two historian-critics. At stake were no less than two strongly competing points of view, based on two competing historiographies for modern architecture: Mumford was indebted to «organic» principles, and guided by ecological and cultural concerns, whereas Hitchcock favored the machine metaphor, its criteria formal, style-oriented, and symbolic. Inciting the confrontation was Mumford’s article, «Status Quo,» published in the widely read journal, The New Yorker in October 1947. There, Mumford proposed the «Bay Region style» as an alternative to the «international style,»—the latter representing for him far too narrow, even sterile modernism still being promoted by the Museum of Modern Art fifteen years after its «international style» exhibition. Mumford argued that Hitchcock had overlooked modernism’s complexity, sense of social purpose, and «personalism» by continuing to identify it with modernist paintings and by investing it with a false and narrow symbolism of the machine. Such a pointed questioning of the «international style» as modernism’s principle mode of explanation looked like an act of heresy to Hitchcock as well as to his associates at the Museum of Modern Art, Alfred Barr and Philip Johnson—so they organized the symposium, «What is Happening to Modern Architecture?» for February 1948 as the Museum’s official response.
URIhttp://hdl.handle.net/2117/120953
ISSN1579-4431