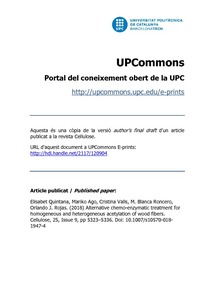 Rojas, Orlando J.
Document typeArticle
Rights accessOpen Access
Abstract
A new chemo-enzymatic treatment is proposed to produce cellulosic fibers suitable for heterogeneous- or homogeneous-phase acetylation. The procedure included enzymatic (laccase–violuric acid) lignin removal from the precursor fibers (unbleached sulfite pulp) followed by hydrogen peroxide treatment. An optional intermediate stage included partial hydrolysis (endoglucanase) to increase fiber reactivity. The obtained ‘‘biobleached’’ fibers were acetylated in the heterogeneous phase with acetic anhydride in nonpolar solvents, yielding various acetyl group contents, depending on the severity of the reaction. The degree of acetylation was highly sensitive to the treatment conditions, mainly the acetic anhydride activity in the system. The results were compared to those obtained after acetylation of commercial, dissolving-grade fibers, used as reference. The effect of the inherent nature of the fibers tested were elucidated as far as hemicellulose content, fiber length, fine content and crystallinity. Acetyl group content of up to 24% were determined after heterogeneous reaction with the chemoenzymatic fibers. The substitution of hydroxyl groups by acetyl moieties resulted in a lower hydrophilicity, as assessed by measurement of the water contact angle. Homogeneous acetylation of the chemo-enzymatic and reference fibers resulted in relatively similar acetyl group content (up to 36 and 33%, respectively). These samples were soluble in acetone and produced transparent films (via solvent casting), with enhanced dry strength and lower hydrophilicity. Overall, it is concluded that the proposed chemo-enzymatic treatment is a feasible alternative for the production of fibers that are suitable for efficient acetylation
CitationQuintana, E., Ago, M., Valls, C., Roncero, M.B., Rojas, O. J. Alternative chemo-enzymatic treatment for homogeneous and heterogeneous acetylation of wood fibers. "Cellulose", 18 Juliol 2018, vol. 25, núm. 9, p. 5323-5336.
URIhttp://hdl.handle.net/2117/120904
DOI10.1007/s10570-018-1947-4
ISSN0969-0239
Publisher versionhttps://link.springer.com/article/10.1007/s10570-018-1947-4
Collections
Share: