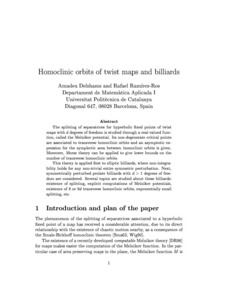 Document typeArticle
Rights accessOpen Access
Abstract
The splitting of separatrices for hyperbolic fixed points of twist maps with $d$ degrees of freedom is studied through a real-valued function, called the Melnikov potential. Its non-degenerate critical points are associated to transverse homoclinic orbits and an asymptotic expression for the symplectic area between homoclinic orbits is given. Moreover, Morse theory can be applied to give lower bounds on the number of transverse homoclinic orbits. This theory is applied first to elliptic billiards, where non-integrability holds for any non-trivial entire symmetric perturbation. Next, symmetrically perturbed prolate billiards with $d>1$ degrees of freedom are considered. Several topics are studied about these billiards: existence of splitting, explicit computations of Melnikov potentials, existence of $8$ or $8d$ transverse homoclinic orbits, exponentially small splitting, etc
URIhttp://hdl.handle.net/2117/1209
Collections
Share: