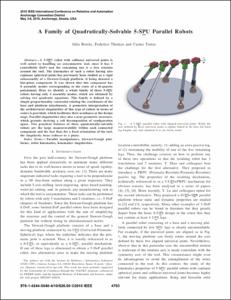 Except where otherwise noted, content on this work is licensed under a Creative Commons license : Attribution-NonCommercial-NoDerivs 3.0 Spain
Abstract
A 5-SPU robot with collinear universal joints is well suited to handling an axisymmetric tool, since it has 5 controllable DoFs and the remaining one is a free rotation around the tool. The kinematics of such a robot having also coplanar spherical joints has previously been studied as a rigid subassembly of a Stewart-Gough platform, it being denoted a line-plane component. It was shown that this component has 8 assembly modes corresponding to the roots of a bi-quartic polynomial. Here we identify a whole family of these 5-SPU robots having only 4 assembly modes, which are obtained by solving two quadratic equations. This family is defined by a simple proportionality constraint relating the coordinates of the base and platform attachments. A geometric interpretation of the architectural singularities of this type of robots in terms of conics is provided, which facilitates their avoidance at the design stage. Parallel singularities obey also a neat geometric structure, which permits deriving a cell decomposition of configuration space. Two practical features of these quadratically-solvable robots are the large maneuverability within each connected component and the fact that, for a fixed orientation of the tool, the singularity locus reduces to a plane. Index Terms—Parallel manipulators, Stewart-Gough platforms, robot kinematics, kinematics singularities.
CitationBorras, J.; Thomas, F.; Torras, C. A family of quadratically-solvable 5-SPU parallel robots. A: IEEE International Conference on Robotics and Automation. "2010 IEEE International Conference on Robotics and Automation". Anchorage: 2010, p. 4703-4708.
URIhttp://hdl.handle.net/2117/12089
DOI10.1109/ROBOT.2010.5509965
Publisher versionhttp://dx.doi.org/10.1109/ROBOT.2010.5509965
Collections
Share: