Between Art and Architecture 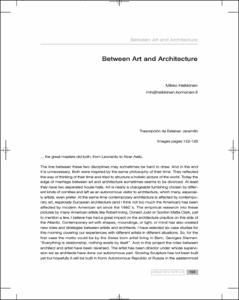 Show full item record
Heikkinen, Mikko
Document typeArticle
PublisherEdicions UPC
Rights accessOpen Access
Abstract
The line between these two disciplines may sometimes be hard to draw. And in the end it is unnecessary. Both were inspired by the same philosophy of their time. They reflected the way of thinking of their time and tried to structure a holistic picture of the world. Today the edge of marriage between art and architecture sometimes seems to be divorced. At least they have two separated house halls. Art is nearly a changeable furnishing chosen by different kinds of comities and left as an autonomous visitor to architecture, which many, especially artists, even prefer. At the same time contemporary architecture is affected by contemporary art, especially European architecture (and I think not too much the American) has been affected by modern American art since the 1960´s.
CitationHeikkinen, M. Between Art and Architecture. "Arquitectonics: Mind, Land & Society", Febrer 2008, núm. 15, p. 103-107.
URIhttp://hdl.handle.net/2117/120888
ISSN1579-4431
Collections
Share: