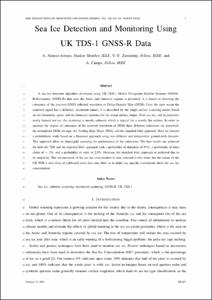 Document typeArticle
PublisherInstitute of Electrical and Electronics Engineers (IEEE)
Rights accessOpen Access
Abstract
A sea ice detection algorithm developed using the U.K. TechDemoSat-1 (U.K. TDS-1) global navigation satellite systems (GNSSs)-reflectometry data over the Arctic and Antarctic regions is presented. It is based on measuring the similarity of the received GNSS reflected waveform or delay Doppler map (DDM) to the coherent reflection model waveform. Over the open ocean, the scattered signal has a diffusive, incoherent nature; it is described by the rough surface scattering model based on the geometric optics and the Gaussian statistics for the ocean surface slopes. Over sea ice and, in particular, newly formed sea ice, the scattered signal acquires a coherence, which is characteristic for a surface with large flat areas. In order to measure the similarity of the received waveform or DDM, to the coherent reflection model, three different estimators are presented: the normalized DDM average, the trailing edge slope (TES), and the matched filter approach. Here, a probabilistic study is presented based on a Bayesian approach using two different and independent ground-truth data sets. This approach allows one to thoroughly assess the performance of the estimators. The best results are achieved for both the TES and the matched filter approach with a probability of detection of 98.5%, a probability of false alarm of ~ 3.6%, and a probability of error of 2.5%. However, the matched filter approach is preferred due to its simplicity. Data from AMSR2 processed using the Arctic Radiation and Turbulence Interaction STudy Sea Ice algorithm and from an Special Sensor Microwave Imager/Sounder radiometer processed by Ocean and Sea Ice SAF have been used as ground truth. A pixel has been classified as a sea ice pixel if the sea ice concentration (SIC) in it was larger than 15%. The measurement of the SIC is also assessed in this paper, but the nature of the U.K. TDS-1 data (lack of calibrated data) does not allow to make any specific conclusions about the SIC.
Description
©2017 IEEE. Personal use of this material is permitted. Permission from IEEE must be obtained for all other uses, in any current or future media, including reprinting/republishing this material for advertising or promotional purposes, creating new collective works, for resale or redistribution to servers or lists, or reuse of any copyrighted component of this work in other works.
CitationAlonso-Arroyo, A., Zavorotny, V.U., Camps, A. Sea ice detection using UK TDS-1 GNSS-R data. "IEEE transactions on geoscience and remote sensing", 1 Setembre 2017, vol. 55, núm. 9, p. 4989-5001.
URIhttp://hdl.handle.net/2117/120800
DOI10.1109/TGRS.2017.2699122
ISSN0196-2892
Publisher versionhttp://ieeexplore.ieee.org/document/7947193/
Collections
Share: