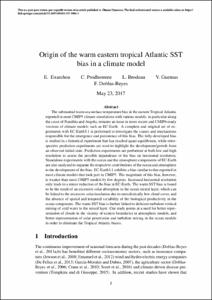 The substantial warm sea surface temperature bias in the eastern Tropical Atlantic reported in most CMIP5 climate simulations with various models, in particular along the coast of Namibia and Angola, remains an issue in more recent and CMIP6-ready versions of climate models such as EC-Earth. A complete and original set of experiments with EC-Earth3.1 is performed to investigate the causes and mechanisms responsible for the emergence and persistence of this bias. The fully-developed bias is studied in a historical experiment that has reached quasi-equilibrium, while retrospective prediction experiments are used to highlight the development/growth from an observed initial state. Prediction experiments are performed at both low and high resolution to assess the possible dependence of the bias on horizontal resolution. Standalone experiments with the ocean and the atmosphere components of EC-Earth are also analyzed to separate the respective contributions of the ocean and atmosphere to the development of the bias. EC-Earth3.1 exhibits a bias similar to that reported in most climate models that took part in CMIP5. The magnitude of this bias, however, is weaker than most CMIP5 models by few degrees. Increased horizontal resolution only leads to a minor reduction of the bias in EC-Earth. The warm SST bias is found to be the result of an excessive solar absorption in the ocean mixed layer, which can be linked to the excessive solar insolation due to unrealistically low cloud cover, and the absence of spatial and temporal variability of the biological productivity in the ocean component. The warm SST bias is further linked to deficient turbulent vertical mixing of cold water to the mixed layer. Our study points at a need for better representation of clouds in the vicinity of eastern boundaries in atmosphere models, and better representation of solar penetration and turbulent mixing in the ocean models in order to eliminate the Tropical Atlantic biases.
CitationExarchou, E. [et al.]. Origin of the warm eastern tropical Atlantic SST bias in a climate model. "Climate Dynamics", Setembre 2018, vol. 51, núm. 5-6, p. 1819-1840.
URIhttp://hdl.handle.net/2117/120792
DOI10.1007/s00382-017-3984-3
ISSN0930-7575
Publisher versionhttps://link.springer.com/article/10.1007/s00382-017-3984-3