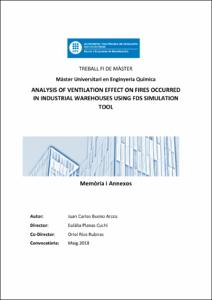 ; Rios Rubiras, Oriol
Document typeMaster thesis
Rights accessOpen Access
Abstract
The project is introduced with a background section, in which the definition of fire basic concepts and compartment fire are exposed, and after these, main mathematical models proposed by literature in order to model them are described, from which are detached the set of parameters to vary in order to modify the features of these kind of fires, and whole chapter has been dedicated to describing the main mathematical models implemented in Fire Dynamics Simulator (FDS) in order to perform its calculations. Once technical background is clear, this project has been ubicated within the applicable legal framework in force at the date this project was handed, concerning requirements of materials constituting structures that might be exposed to fire, focusing on the content of the Spanish Regulation of Fire Safety in Industrial Establishments, and, a whole chapter has been dedicated to describe the study performed by Generalitat de Catalunya Fire Service, indicating the features of simulated scenario and, briefly, its results. It has been explained, by first, how experimental scenario has been implemented in FDS and which have been those variables selected in order to be provided within the wide range of possible output values that FDS offers. Previous simple studies have been carried out, such as setting the most suitable mesh size or proving that mass is conserved according to input data provided to simulator. In order to know which is the possible effect that ventilation variations could have on final observed results, the effect of size, distribution and ubication of ventilation gaps has been studied. Finally, some of the simulations originally performed by Generalitat de Catalunya Fire Service with OZone have been reproduced with FDS, followed by the corresponding comparison and exposing final results.
SubjectsWarehouses--Fires and fire prevention, Magatzems -- Incendis i prevenció d'incendis
URIhttp://hdl.handle.net/2117/120740
Collections
Share: