Description of a Non-Canonical Mn(II)-Oxidation Site in Peroxidases 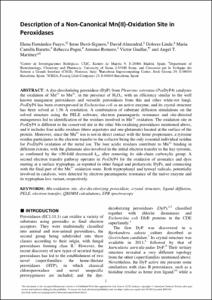 Description of a Non-Canonical Mn(II)-Oxidation Site in Peroxidases.pdf (2,288Mb)
Share:

Martinez, Angel T.
Document typeArticle
PublisherAmerican Chemical Society
Rights accessOpen Access
All rights reserved. This work is protected by the corresponding intellectual and industrial property rights. Without prejudice to any existing legal exemptions, reproduction, distribution, public communication or transformation of this work are prohibited without permission of the copyright holder
ProjectEnzOx2 - New enzymatic oxidation%2Foxyfunctionalization technologies for added value bio-based products (EC-H2020-720297)
INDOX - Optimized oxidoreductases for medium and large scale industrial biotransformations (EC-FP7-613549)
NUEVAS ENZIMAS OXIDATIVAS PARA UNA INDUSTRIA SOSTENIBLE (MINECO-BIO2014-56388-R)
GENOMAS DE BASIDIOMICETOS PARA LAS BIORREFINERIAS DE LIGNOCELULOSA (AEI-BIO2017-86559-R)
Abstract
A dye-decolorizing peroxidase (DyP) from Pleurotus ostreatus (PosDyP4) catalyzes the oxidation of Mn2+ to Mn3+, in the presence of H2O2, with an efficiency similar to the well-known manganese peroxidases and versatile peroxidases from this and other white-rot fungi. PosDyP4 has been overexpressed in Escherichia coli as an active enzyme, and its crystal structure has been solved at 1.56 Å resolution. A combination of substrate diffusion simulations on the solved structure using the PELE software, electron paramagnetic resonance, and site-directed mutagenesis led to identification of the residues involved in Mn2+ oxidation. The oxidation site in PosDyP4 is different than the conserved site in the other Mn-oxidizing peroxidases mentioned above, and it includes four acidic residues (three aspartates and one glutamate) located at the surface of the protein. Moreover, since the Mn2+ ion is not in direct contact with the heme propionates, a tyrosine residue participates in the electron transfer to the cofactor, being the only essential individual residue for PosDyP4 oxidation of the metal ion. The four acidic residues contribute to Mn2+ binding in different extents, with the glutamate also involved in the initial electron transfer to the key tyrosine, as confirmed by the >50-fold decreased kcat after removing its side-chain carboxylic group. A second electron transfer pathway operates in PosDyP4 for the oxidation of aromatics and dyes starting at a surface tryptophan, as reported in other fungal and prokaryotic DyPs, and connecting with the final part of the Mn2+ oxidation route. Both tryptophanyl and tyrosyl radicals, potentially involved in catalysis, were detected by electron paramagnetic resonance of the native enzyme and its tryptophan-less variant, respectively.
CitationFernández-Fueyo, E. [et al.]. Description of a Non-Canonical Mn(II)-Oxidation Site in Peroxidases. "", 31 Juliol 2018, vol. 8, p. 8386-8395.
URIhttp://hdl.handle.net/2117/120659
DOI10.1021/acscatal.8b02306
ISSN2155-5435
Publisher versionhttps://pubs.acs.org/doi/abs/10.1021/acscatal.8b02306
Collections
Share: