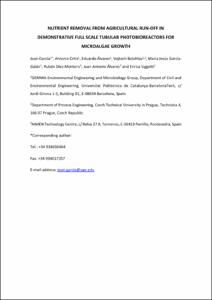 Álvarez, Juan Antonio
Document typeArticle
Rights accessOpen Access
ProjectINCOVER - Innovative Eco-Technologies for Resource Recovery from Wastewater (EC-H2020-689242)
Abstract
The objective of this paper is to present the design, construction and operation (during one year) of 3 full scale semi-closed, horizontal tubular photobioreactors (PBR, 11.7 m3 of volume each) used to remove nutrients of a mixture of agricultural run-off (90%) and treated domestic wastewater (10%). PBRs were located outdoor and have 2 paddlewheels (engines of 0.25 kW) to ensure the movement of the mixed liquor. The microalgal biomass produced in the PBRs was harvested in a static lamella settling tank in which a polyaluminium chloride coagulant is applied. Each PBR treated in average 2.3 m3/d, being the actual mean hydraulic retention time 5 d. PBRs were submitted to strong seasonal changes regarding solar radiation and temperature, which had a direct impact in the activity of microalgae and the efficiency of the system. Higher mixed liquor pH values were registered in summer (daily average > 10). These high values were not observed in the effluents because the system was designed to discharge the mixed liquor (effluent) only at the end of night, when pH reached the lowest daily values (around 8.5). Most of the influent and effluent nitrogen content was inorganic (average of 9.0¿mg¿N/L and 3.17 mg N/L, respectively), and in the form of nitrate (62% and 50%, respectively). Average nitrogen removal efficiency was 65%, with values of around 90% in summer, 80% in autumn, 50% in winter and 60% in spring. Most of the influent and effluent phosphorus content was in the form of orthophosphate. Influent average was 0.62 mg P/L, but with great variations and in a considerable number of samples not detected. Removal efficiency (when influent values were detected) was very high during all the study, usually greater than 95%, and there were not clear seasonal trends for efficiency as observed for TIN. Volumetric biomass production greatly changed between seasons with much lower values in winter (7 g VSS (volatile suspended solids)/m3·d) than in summer (43 g VSS/m3·d). Biomass separation efficiency of the settler was very good in either terms of turbidity and total suspended solids, being most of the time lower than 5 UNT and 25 mg/L, respectively. Overall this study demonstrated the reliable and good effectiveness of microalgae based technologies such as the PBR to remove nutrients at a full scale size.
CitationGarcia, J., Ortiz, A., Álvarez, E., Vojtech, L., Garcia, M., Diez Montero, Ruben, Uggetti, E., Álvarez, J. Nutrient removal from agricultural run-off in demonstrative full scale tubular photobioreactors for microalgae growth. "Ecological engineering", Setembre 2018, vol. 120, p. 513-521.
URIhttp://hdl.handle.net/2117/120616
DOI10.1016/j.ecoleng.2018.07.002
ISSN0925-8574
Publisher versionhttps://www.sciencedirect.com/science/article/pii/S0925857418302404
Other identifiershttps://arxiv.org/abs/1807.05189
Collections
Share: