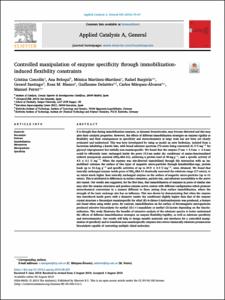 Show full item record
Coscolín, Cristina
Beloqui, Ana
Martínez-Martínez, Mónica
Bargiela, Rafael
Santiago, Gerard
Blanco, Rosa M.
Delaittre, Guillaume
Márquez-Álvarez, Carlos
Ferrer, Manuel
Document typeArticle
PublisherElsevier
Rights accessOpen Access
European Commission's projectINMARE - Industrial Applications of Marine Enzymes: Innovative screening and expression platforms to discover and use the functional protein diversity from the sea (EC-H2020-634486)
Abstract
It is thought that during immobilization enzymes, as dynamic biomolecules, may become distorted and this may alter their catalytic properties. However, the effects of different immobilization strategies on enzyme rigidity or flexibility and their consequences in specificity and stereochemistry at large scale has not been yet clearly evaluated and understood. This was here investigated by using as model an ester hydrolase, isolated from a bacterium inhabiting a karstic lake, with broad substrate spectrum (72 esters being converted; 61.5 U mg−1 for glyceryl tripropionate) but initially non-enantiospecific. We found that the enzyme (7 nm × 4.4 nm × 4.2 nm) could be efficiently ionic exchanged inside the pores (9.3 nm under dry conditions) of amino-functionalized ordered mesoporous material (NH2-SBA-15), achieving a protein load of 48 mg g−1, and a specific activity of 4.5 ± 0.1 U mg−1. When the enzyme was site-directed immobilized through His interaction with an immobilized cationon the surface of two types of magnetic micro-particles through hexahistidine-tags, protein loads up to 10.2 μg g−1 and specific activities of up to 29.9 ± 0.3 U mg−1, were obtained. We found that ionically exchanged enzyme inside pores of NH2-SBA-15 drastically narrowed the substrate range (17 esters), to an extent much higher than ionically exchanged enzyme on the surface of magnetic micro-particles (up to 61 esters). This is attributed to differences in surface chemistry, particle size, and substrate accessibility to the active site tunnel. Our results also suggested, for the first time, that immobilization of enzymes in pores of similar size may alter the enzyme structures and produce enzyme active centers with different configuration which promote stereochemical conversions in a manner different to those arising from surface immobilization, where the strength of the ionic exchange also has an influence. This was shown by demonstrating that when the enzyme was introduced inside pores with a diameter (under dry conditions) slightly higher than that of the enzyme crystal structure a biocatalyst enantiospecific for ethyl (R)-4-chloro-3-hydroxybutyrate was produced, a feature not found when using wider pores. By contrast, immobilization on the surface of ferromagnetic microparticles produced selective biocatalysts for methyl (S)-(+)-mandelate or methyl (S)-lactate depending on the functionalization. This study illustrates the benefits of extensive analysis of the substrate spectra to better understand the effects of different immobilization strategies on enzyme flexibility/rigidity, as well as substrate specificity and stereochemistry. Our results will help to design tunable materials and interfaces for a controlled manipulation of specificity and to transform non-enantiospecific enzymes into stereo-chemically substrate promiscuous biocatalysts capable of converting multiple chiral molecules.
CitationCoscolín, C. [et al.]. Controlled manipulation of enzyme specificity through immobilization-induced flexibility constraints. "Applied Catalysis A: General", 5 Setembre 2018, vol. 565, p. 59-67.
URIhttp://hdl.handle.net/2117/120565
DOI10.1016/j.apcata.2018.08.003
ISSN0926-860X
Publisher versionhttps://www.sciencedirect.com/science/article/pii/S0926860X18303879
Collections
Share: