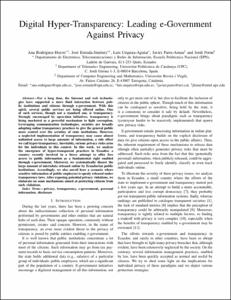 For a long time, the Internet and web technologies have supported a more fluid interaction between public institutions and citizens through e-government. With this spirit, several public services are being offered online. One of such services, though not a standard one, is transparency. Strongly encouraged by open-data initiatives, transparency is being marketed as a powerful mechanism to fight corruption. Leveraging communication technologies, societies are broadly adopting online transparency practices to give the general public more control over the scrutiny of state institutions. However, a neglected implementation of transparency may cause almost unlimited access to large amounts of information, a side effect we call hyper-transparency. Inevitably, serious privacy risks arise for the individuals in this context. In this work, we analyze the emergence of hyper-transparent practices in Ecuador, a country recently involved in a fierce attempt to offer free access to public information as a fundamental right enabled through e-government. Moreover, we systematically dissect the large amount of microdata released online by Ecuadorian public institutions. Accordingly, we also unveil here a scenario where sensitive information of public employees is openly released under transparency laws. After exposing potential privacy violations, we elaborate on some mechanisms aimed at protecting citizens from such violations

© 2018 IEEE. Personal use of this material is permitted. Permission from IEEE must be obtained for all other uses, in any current or future media, including reprinting/republishing this material for advertising or promotional purposes,creating new collective works, for resale or redistribution to servers or lists, or reuse of any copyrighted component of this work in other works.
CitationRodríguez-Hoyos, A., Estrada-Jimenez, J., Urquiza, L., Parra-Arnau, J., Forne, J. Digital hyper-transparency: leading e-government against privacy. A: International Conference on E-Business and E-Government. "2018 International Conference on eDemocracy & eGovernment (ICEDEG 2018): Ambato, Ecuador: 4-6 April 2018". Institute of Electrical and Electronics Engineers (IEEE), 2018, p. 263-268.
URIhttp://hdl.handle.net/2117/120546
DOI10.1109/ICEDEG.2018.8372369
ISBN978-1-5386-2522-4
Publisher versionhttps://ieeexplore.ieee.org/document/8372369/