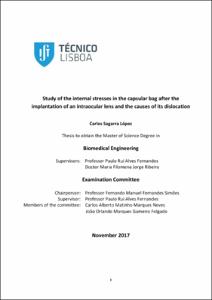 Cataract surgery is very common and the majority of these surgeries are successful and are really fast. However, some people who are operated of cataracts have problems after a while (after 5-7 years or more): they suffer a dislocation of the IOL (intraocular lens), and still is not clear the reasons why this happens. The aim of this work is to find out what is causing this problem. And in order to reach the objective, the study was done creating a 3D finite element model of the capsular bag, the intraocular lens (IOL) and the zonular fibres in ABAQUS. About this study there are a few things to take into account: the capsular bag is considered a membrane which is the most similar model to the real one, also the ligaments were modelled as wires and the IOL was made of three different material: polymethyl methacrylate (PMMA), silicone and natural material of human lens as a control group. The results show that the stresses on the capsular bag and also on the lens are asymmetric so the stress is not distributed in the same directions than before the surgery, what is interesting information in order to advance on this project. There are studies those show that after cataracts surgery the pressure inside the eye it is the same or even lower than before this operation, which means that is not a crucial aspect to take into account as it is for example the deterioration of the tissues of human eye.
SubjectsIntraocular lenses, Dislocations, Cataract, Finite element method, Elements finits, Mètode dels, Cataractes (Oftalmologia), Lents intraoculars
URIhttp://hdl.handle.net/2117/120541