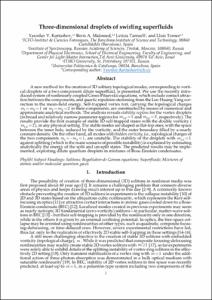 A new method for the creation of 3D solitary topological modes, corresponding to vortical droplets of a two-component dilute superfluid, is presented. We use the recently introduced system of nonlinearly coupled Gross-Pitaevskii equations, which include contact attraction between the components, and quartic repulsion stemming from the Lee-Huang-Yang correction to the mean-field energy. Self-trapped vortex tori, carrying the topological charges m1=m2=1 or m1=m2=2 in their components, are constructed by means of numerical and approximate analytical methods. The analysis reveals stability regions for the vortex droplets (in broad and relatively narrow parameter regions for m1=m2=1 and m1=m2=2, respectively). The results provide the first example of stable 3D self-trapped states with the double vorticity, in any physical setting. The stable modes are shaped as flat-top ones, with the space between the inner hole, induced by the vorticity, and the outer boundary filled by a nearly constant density. On the other hand, all modes with hidden vorticity, i.e., topological charges of the two components m1=-m2=1, are unstable. The stability of the droplets with m1=m2=1 against splitting (which is the main scenario of possible instability) is explained by estimating analytically the energy of the split and un-split states. The predicted results may be implemented, exploiting dilute quantum droplets in mixtures of Bose-Einstein condensates.
CitationKartashov, Y.V., Malomed, B., Tarruell, L., Torner, L. Three-dimensional droplets of swirling superfluids. "Physical review A", 12 Juliol 2018, vol. 98, núm. 1, p. 013612-1-013612-9.
URIhttp://hdl.handle.net/2117/120489
DOI10.1103/PhysRevA.98.013612
ISSN2469-9926
Publisher versionhttps://link.aps.org/doi/10.1103/PhysRevA.98.013612
Other identifiershttps://arxiv.org/abs/1806.08570