Hygroscopic growth study in the framework of EARLINET during the SLOPE i campaign: Synergy of remote sensing and in situ instrumentation 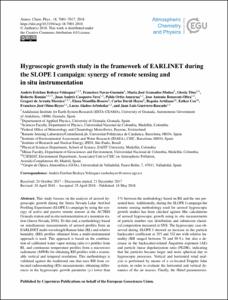 Show full item record
Bedoya Velásquez, Andrés Esteban
Navas Guzmán, Francisco
Granados Muñoz, María José
Document typeArticle
PublisherEuropean Geosciences Union (EGU)
Rights accessOpen Access
Abstract
This study focuses on the analysis of aerosol hygroscopic growth during the Sierra Nevada Lidar AerOsol Profiling Experiment (SLOPE I) campaign by using the synergy of active and passive remote sensors at the ACTRIS Granada station and in situ instrumentation at a mountain station (Sierra Nevada, SNS). To this end, a methodology based on simultaneous measurements of aerosol profiles from an EARLINET multi-wavelength Raman lidar (RL) and relative humidity (RH) profiles obtained from a multi-instrumental approach is used. This approach is based on the combination of calibrated water vapor mixing ratio (r) profiles from RL and continuous temperature profiles from a microwave radiometer (MWR) for obtaining RH profiles with a reasonable vertical and temporal resolution. This methodology is validated against the traditional one that uses RH from co-located radiosounding (RS) measurements, obtaining differences in the hygroscopic growth parameter (¿) lower than 5% between the methodology based on RS and the one presented here. Additionally, during the SLOPE I campaign the remote sensing methodology used for aerosol hygroscopic growth studies has been checked against Mie calculations of aerosol hygroscopic growth using in situ measurements of particle number size distribution and submicron chemical composition measured at SNS. The hygroscopic case observed during SLOPE I showed an increase in the particle backscatter coefficient at 355 and 532nm with relative humidity (RH ranged between 78 and 98%), but also a decrease in the backscatter-related Ångström exponent (AE) and particle linear depolarization ratio (PLDR), indicating that the particles became larger and more spherical due to hygroscopic processes. Vertical and horizontal wind analysis is performed by means of a co-located Doppler lidar system, in order to evaluate the horizontal and vertical dynamics of the air masses. Finally, the Hänel parameterization is applied to experimental data for both stations, and we found good agreement on ¿ measured with remote sensing (¿532¿=¿0.48±0.01 and ¿355¿=¿0.40±0.01) with respect to the values calculated using Mie theory (¿532¿=¿0.53±0.02 and ¿355¿=¿0.45±0.02), with relative differences between measurements and simulations lower than 9% at 532nm and 11% at 355nm.
CitationBedoya-Velásquez, A., Navas, F., Granados, M. Hygroscopic growth study in the framework of EARLINET during the SLOPE i campaign: Synergy of remote sensing and in situ instrumentation. "Atmospheric chemistry and physics", 18 Maig 2018, vol. 18, p. 7001-7017.
URIhttp://hdl.handle.net/2117/120315
DOI10.5194/acp-18-7001-2018
ISSN1680-7324
Publisher versionhttps://www.atmos-chem-phys.net/18/7001/2018/acp-18-7001-2018.pdf
Collections
Share: