Anterior chamber parameters in early and advanced keratoconus. A meridian by meridian analysis 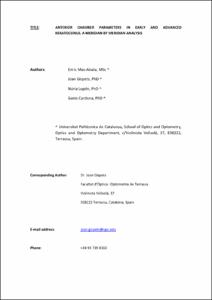 Document typeArticle
Rights accessOpen Access
Abstract
Purpose: To explore anterior segment changes with keratoconus onset and progression to determine whether structural changes are predominantly corneal, limbal or both. To investigate these changes in different corneal meridians. Method: Eighty-four eyes with keratoconus and 49 healthy eyes were included in the study. Eyes with keratoconus were divided in two groups according to the Amsler-Krumeich classification: stage I and stages II-IV. Scheimpflug images at three different meridians were used to evaluate the following parameters: anterior chamber depth from the endothelium (ACD_end) and corneal thickness (CT) (software provided), anterior chamber depth (ACD) and sagittal depth (SAGT) from the epithelium, and distance from the end point of SAGT to the anterior surface of the lens (DL) (measured manually), and [ACD – CT] and [SAGT – CT] (calculated). Changes in these parameters with ocular condition and meridian were analysed. Results: Statistically significant larger values were found of ACD (p=0.012) and DL (p=0.016) with keratoconus onset and progression, with no differences in SAGT values. Besides, [ACD – CT] and [SAGT – CT] were significantly larger in keratoconus eyes (p<0.001 and p=0.003, respectively). Significant differences (all p<0.001) were found in SAGT, [SAGT – CT] and DL among meridians. Changes in these parameters with keratoconus onset and progression were similar in all meridians. Conclusion: Considering the results from the three meridians under investigation, it may be concluded that keratoconus onset has an impact on the anterior segment as a whole and not only on corneal structures. The DL distance is a useful parameter to describe limbal changes in keratoconus.
CitationMas, E., Gispets, J., Lupon, N., Cardona, G. Anterior chamber parameters in early and advanced keratoconus. A meridian by meridian analysis. "Contact lens and anterior eye", vol. 41, núm. 6, p. 538-541.
URIhttp://hdl.handle.net/2117/120117
DOI10.1016/j.clae.2018.07.001
ISSN1367-0484
Publisher versionhttps://www.contactlensjournal.com/article/S1367-0484(18)30750-1/fulltext
Collections
Share: