Backlund transformations on coadjoint orbits of the loop algebra gl(n) 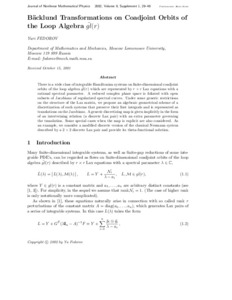 There is a wide class of integrable Hamiltonian systems on ﬁnite-dimensional coadjoint orbits of the loop algebra ˜ gl(r) which are represented by r × r Lax equations with a rational spectral parameter.A reduced complex phase space is foliated with open subsets of Jacobians of regularized spectral curves.Under some generic restrictions on the structure of the Lax matrix, we propose an algebraic geometrical scheme of a discretization of such systems that preserve their ﬁrst integrals and is represented as translations on the Jacobians.A generic discretizing map is given implicitly in the form of an intertwining relation (a discrete Lax pair) with an extra parameter governing the translation.Some special cases when the map is explicit are also considered.As an example, we consider a modiﬁed discrete version of the classical Neumann system described by a 2 × 2 discrete Lax pair and provide its theta-functional solution.
URIhttp://hdl.handle.net/2117/1200