Role of tungsten doping on the surface states in BiVO4 photoanodes for water oxidation: tuning the electron trapping process 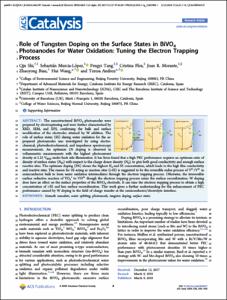 Document typeArticle
Rights accessOpen Access
Abstract
The nanostructured BiVO4 photoanodes were prepared by electrospinning and were further characterized by XRD, SEM, and XPS, confirming the bulk and surface modification of the electrodes attained by W addition. The role of surface states (SS) during water oxidation for the as-prepared photoanodes was investigated by using electrochemical, photoelectrochemical, and impedance spectroscopy measurements. An optimum 2% doping is observed in voltammetric measurements with the highest photocurrent density at 1.23 VRHE under back side illumination. It has been found that a high PEC performance requires an optimum ratio of density of surface states (NSS) with respect to the charge donor density (Nd), to give both good conductivity and enough surface reactive sites. The optimum doping (2%) shows the highest Nd and SS concentration, which leads to the high film conductivity and reactive sites. The reason for SS acting as reaction sites (i-SS) is suggested to be the reversible redox process of V5+/V4+ in semiconductor bulk to form water oxidation intermediates through the electron trapping process. Otherwise, the irreversible surface reductive reaction of VO2+ to VO2+ though the electron trapping process raises the surface recombination. W doping does have an effect on the surface properties of the BiVO4 electrode. It can tune the electron trapping process to obtain a high concentration of i-SS and less surface recombination. This work gives a further understanding for the enhancement of PEC performance caused by W doping in the field of charge transfer at the semiconductor/electrolyte interface.
CitationShi, Q., S. Murcia-López, Tang, P., Flox, C., Morante, J.R., Bian, Z., Wagn, H., Andreu, T. Role of tungsten doping on the surface states in BiVO4 photoanodes for water oxidation: tuning the electron trapping process. "ACS catalysis", 9 Març 2018, vol. 8, núm. 4, p. 3331-3342.
URIhttp://hdl.handle.net/2117/119860
DOI10.1021/acscatal.7b04277
ISSN2155-5435
Collections
Share: