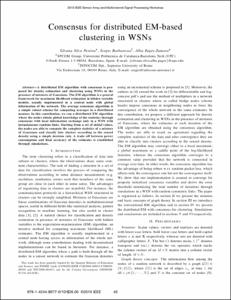 Document typeConference lecture
PublisherIEEE Press. Institute of Electrical and Electronics Engineers
Rights accessOpen Access
Abstract
A distributed EM algorithm with consensus is proposed for density estimation and clustering using WSNs in the presence of mixtures of Gaussians. The EM algorithm is a general framework for maximum likelihood estimation in hidden variable models, usually implemented in a central node with global information of the network. The average consensus algorithm is a simple robust scheme for computing averages in a distributed manner. In this contribution, we run a distributed EM algorithm where the nodes obtain global knowledge of the statistics through consensus with local information exchange only in a WSN with instantaneous random links. Starting from a set of initial values, the nodes are able to compute the complete statistics of a mixture of Gaussians and classify into clusters according to the sensed density using a simple decision rule. A trade off between power consumption and final accuracy of the estimates is established through simulations.
CitationSilva, S.; Barbarossa, S.; Pages, A. Consensus for distributed EM-based clustering in WSNs. A: IEEE Sensor Array and Multichannel Signal Processing Workshop. "2010 IEEE Sensor Array and Multichannel Signal Processing Workshop". Jerusalem - Tel-Aviv: IEEE Press. Institute of Electrical and Electronics Engineers, 2010, p. 45-48.
URIhttp://hdl.handle.net/2117/11975
Publisher versionhttp://gps-tsc4.upc.es/documents/file_1512.pdf
Collections
Share: