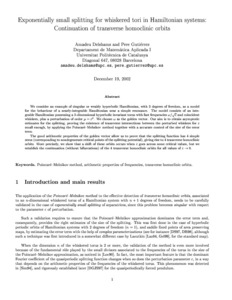 Document typeArticle
Rights accessOpen Access
Abstract
We consider an example of singular or weakly hyperbolic Hamiltonian, with 3 degrees of freedom, as a model for the behaviour of a nearly-integrable Hamiltonian near a simple resonance. The model consists of an integrable Hamiltonian possessing a $2$-dimensional hyperbolic invariant torus with fast frequencies omega/(epsilon^(1/2)) and coincident whiskers, plus a perturbation of order mu=epsilon. We choose omega as the golden vector. Our aim is to obtain asymptotic estimates for the splitting, proving the existence of transverse intersections between the perturbed whiskers for E small enough, by applying the Poincaré-Melnikov method together with a accurate control of the size of the error term. The good arithmetic properties of the golden vector allow us to prove that the splitting function has 4 simple zeros (corresponding to nondegenerate critical points of the splitting potential), giving rise to 4~transverse homoclinic orbits. More precisely, we show that a shift of these orbits occurs when E goes across some critical values, but we establish the continuation (without bifurcations) of the 4~transverse homoclinic orbits for all values of E->0.
URIhttp://hdl.handle.net/2117/1197
Collections
Share: