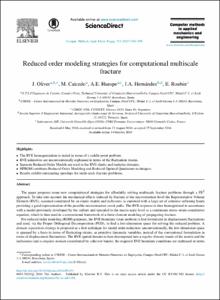 Roubin, Emmanuel
Document typeArticle
Rights accessOpen Access
European Commission's projectCOMP-DES-MAT - Advanced tools for computational design of engineering materials (EC-FP7-320815)
Abstract
The paper proposes some new computational strategies for affordably solving multiscale fracture problems through a FE2 approach. To take into account the mechanical effects induced by fracture at the microstructure level the Representative Volume Element (RVE), assumed constituted by an elastic matrix and inclusions, is endowed with a large set of cohesive softening bands providing a good representation of the possible microstructure crack paths. The RVE response is then homogenized in accordance with a model previously developed by the authors and upscaled to the macro-scale level as a continuum stress–strain constitutive equation, which is then used in a conventional framework of a finite element modeling of propagating fracture. For reduced order modeling (ROM) purposes, the RVE boundary value problem is first formulated in displacement fluctuations and used, via the Proper Orthogonal Decomposition (POD), to find a low-dimension space for solving the reduced problem. A domain separation strategy is proposed as a first technique for model order reduction: unconventionally, the low-dimension space is spanned by a basis in terms of fluctuating strains, as primitive kinematic variables, instead of the conventional formulation in terms of displacement fluctuations. The RVE spatial domain is then decomposed into a regular domain (made of the matrix and the inclusions) and a singular domain (constituted by cohesive bands), the required RVE boundary conditions are rephrased in terms of strains and imposed via Lagrange multipliers in the corresponding variational problem. Specific low-dimensional strain basis is then derived, independently for each domain, via the POD of the corresponding strain snapshots. Next step consists of developing a hyper-reduced model (HPROM). It is based on a second proposed technique, the Reduced Optimal Quadrature (ROQ) which, again unconventionally, is determined through optimization of the numerical integration of the primitive saddle-point problem arising from the RVE problem, rather than its derived variational equations, and substitutes the conventional Gauss quadrature. The ROQ utilizes a very reduced number of, optimally placed, sampling points, the corresponding weights and placements being evaluated through a greedy algorithm. The resulting low-dimensional and reduced-quadrature variational problem translates into very relevant savings on the computational cost and high computational speed-ups. Particular attention is additionally given to numerical tests and performance evaluations of the new hyper-reduced methodology, by “a-priori” and “a-posteriori” error assessments. Moreover, for the purposes of validation of the present techniques, a real structural problem exhibiting propagating fracture at two-scales is modeled on the basis of the strain injection-based multiscale approach previously developed by the authors. The performance of the proposed strategy, in terms of speed-up vs. error, is deeply analyzed and reported.
CitationOliver, J., Caicedo, M., Huespe, A., Hernandez, J.A., Roubin , E. Reduced order modeling strategies for computational multiscale fracture. "Computer methods in applied mechanics and engineering", Gener 2017, vol. 313, p. 560-595.
URIhttp://hdl.handle.net/2117/119691
DOI10.1016/j.cma.2016.09.039
ISSN0045-7825
Publisher versionhttp://www.sciencedirect.com/science/article/pii/S0045782516303322
Collections
Share: