Impedance modelling and parametric sensitivity of a VSC-HVDC system: New insights on resonances and interactions 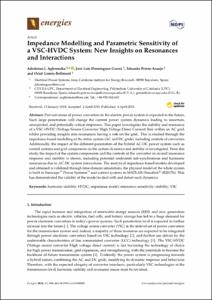 Document typeArticle
Rights accessOpen Access
Abstract
Pervasiveness of power converters in the electric power system is expected in the future. Such large penetration will change the current power system dynamics leading to uncertain, unexpected, and potentially critical responses. This paper investigates the stability and resonance of a VSC-HVDC (Voltage Source Converter High Voltage Direct Current) link within an AC grid, whilst providing insights into resonances having a role on the grid. This is studied through the impedance-based modelling of the entire system (AC and DC grids), including controls of converters. Additionally, the impact of the different parameters of the hybrid AC-DC power system such as control systems and grid components on the system dynamics and stability is investigated. From this study, the impact of the system components and the controls of the converter on overall resonance response and stability is shown, including potential undesired sub-synchronous and harmonic resonances due to AC-DC system interactions. The analytical impedance-based models developed and obtained is validated through time-domain simulations, the physical model of the whole system is built in Simscape™ Power Systems™ and control systems in MATLAB/Simulink® (R2017b). This has demonstrated the validity of the model to deal with and detect such dynamics. © 2018 by the authors. Licensee MDPI, Basel, Switzerland.
CitationAgbemuko, A., Dominguez, J., Eduardo Prieto-Araujo, Gomis-Bellmunt, O. Impedance modelling and parametric sensitivity of a VSC-HVDC system: New insights on resonances and interactions. "Energies", 1 Abril 2018, vol. 11, núm. 4.
URIhttp://hdl.handle.net/2117/119666
DOI10.3390/en11040845
ISSN1996-1073
Publisher versionhttp://www.mdpi.com/1996-1073/11/4/845
Collections
Share: